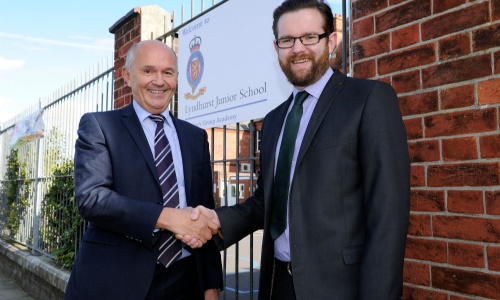 Mr. Martindale has been Acting Headteacher since January 2017, following the retirement of Mrs Margaret Beel, former Headteacher, at the end of last year.

Following a rigorous recruitment process, King’s Group Academies are delighted to announce that Mr Martindale has now been officially appointed this week as the school’s new Headteacher; a role that will commence with immediate effect.

Mr. Martindale is a Maths specialist and his work in developing Maths Mastery classes across the city of Portsmouth has attracted widespread acclaim. He first joined Lyndhurst Junior School as Vice Principal in September 2015, and previously worked as a Deputy Headteacher at a Primary school in Wiltshire.

“My vision for Lyndhurst Junior School is for our children to leave us literate and numerate; hardworking; able to communicate; confident in themselves and compassionate. We work hard to provide a creative and challenging curriculum in order to build children’s skills, confidence and self-esteem.”